Roger Federer has hit more career aces than his long-term rivals Rafael Nadal and Novak Djokovic have managed between them. The trio have dominated tennis for the last 15 years and are regarded as three of the best players to ever play the game.

Federer became the first of the trio to win a Grand Slam title when he tasted glory at Wimbledon in 2003.

The Swiss player has gone on to win 20 majors, as has Serbian Djokovic, who was victorious at a Grand Slam for the first time in 2008 when he stormed to the Australian Open title.

But the 35-year-old moved ahead after launching a stunning comeback to defeat Daniil Medvedev in five sets in Melbourne.

During his illustrious career, Federer has racked-up an incredible 11,452 aces.

And Federer tops the charts despite playing over 900 matches fewer than his adversaries combined.

Federer was forced to miss January’s Australian Open as he continues his recovery from knee surgery.

The 40-year-old hasn’t appeared at a Grand Slam since reaching the quarter-finals of Wimbledon last year.

And his advancing years and fitness issues mean he is unlikely to win another major before calling time on his playing days.

Despite Nadal becoming the most successful men’s player ever after his success Down Under, the debate rages on over which of the superstars should be regarded as the greatest of all time. 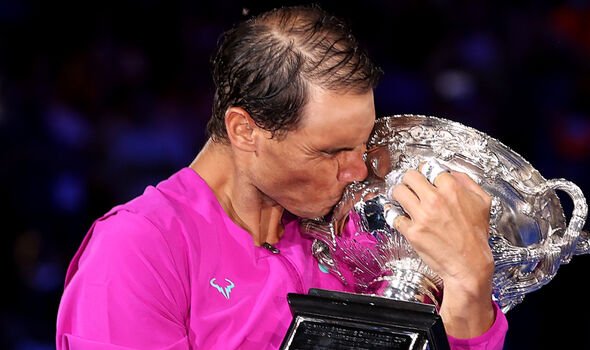 “It depends on the day, who are you talking to, what surface,” McEnroe said earlier this year.

“But then Novak has beaten him three times at Wimbledon I believe. Novak also has a winning record against those two. He is slightly ahead of those two.”

But ex-Spanish player David Ferrer believes the honour should be bestowed on Nadal.

“He has won everything,” Ferrer said in January. “There is nothing else he can achieve.

“You can debate who is more aesthetically pleasing or beautiful to watch – but at the end of the day tennis is about who wins the most important titles.”