What is Mike Tyson’s net worth?

Mike Tyson is an American former professional boxer, who had a successful 20-year career within the sport. Despite a few ups and downs along the way.

Tyson was the undisputed world heavyweight champion, and still holds the record as the youngest boxer ever to win a heavyweight title at 20 years, 4 months, and 22 days old.

Back in the day, he had accrued over $300 million dollars throughout his career but ended up losing it all.

Mike Tyson was born on the 30th June 1966, in Brownsville, Brooklyn, New York. He had two siblings, Rodney and Denise; however, his sister passed away from a heart attack at only 24 years old.

Although, Tyson’s biological father is listed as “Purcell Tyson”, Mike saw his father figure as Jimmy Kirkpatrick. Kirkpatrick was from Grier Town, North Carolina, and one of the neighborhood’s top baseball players. He was quite a gambler and hung out in areas you’d expect someone of that nature to be in.

Kirkpatrick abandoned the family later on, and Tyson’s mother died when he was only 16 years old. Which left him in the care of his boxing manager Cus D’Amato.

Throughout his childhood, Tyson lived in and around high-crime neighborhoods. He’s mentioned in a past interview that his first fight was with a bigger youth, who had pulled the head off one of his pigeons.

Tyson was regularly caught committing crimes and had already been arrested 38 times by age 13. He ended up at the Tryon School for Boys in Johnstown, and later dropped out of high school.

Tyson was 18 years old when he made his professional debut in boxing. Prior to that, he’d competed as an amateur in the Junior Olympics.

He quickly grew to become the champion, after winning 26 of his first 28 fights by either KO or TKO. For a long time, people thought Tyson was unbeatable. That was, until Buster Douglas came along. You’ve probably heard Douglas’ story about his mother passing away before the fight, after telling everyone her son was going to beat Mike Tyson.

Douglas managed to last more rounds than anybody else had ever gone to with Tyson; and after reaching that point, realized that Tyson began to lose energy and stamina rapidly after the 5 or 6th round.

Tyson was the first heavyweight boxer to simultaneously hold the WBA, WBC and IBF titles, and the only heavyweight to unify them successively. He is still considered, to this day, one of the best boxers of all time.

However, his reputation was very much stained after being sentenced to prison for 6 years, after being convicted of rape. He tried to make a comeback after his prison sentence, but it was short-lived.

How Does Mike Tyson Spend His Money?

Mike Tyson is arguably ranked in the top-15 heavyweight boxers to ever step foot into the gladiatorial arena; but he’s ranked much higher in the pound-for-pound spectacular spending stakes.

When Mike was released from prison in 1995, after serving four years, he had a reported $300 million dollars in the bank to smoothen his transition back into normal life.

Mike bought a 21-bedroom/24-bathroom mansion in Connecticut with an on-site casino and a nightclub. He also purchased estates in Maryland, Las Vegas, and Ohio, where he had gold-plated furnishings and a basketball court.

Here are some of the best highlights of Mike Tyson’s career: 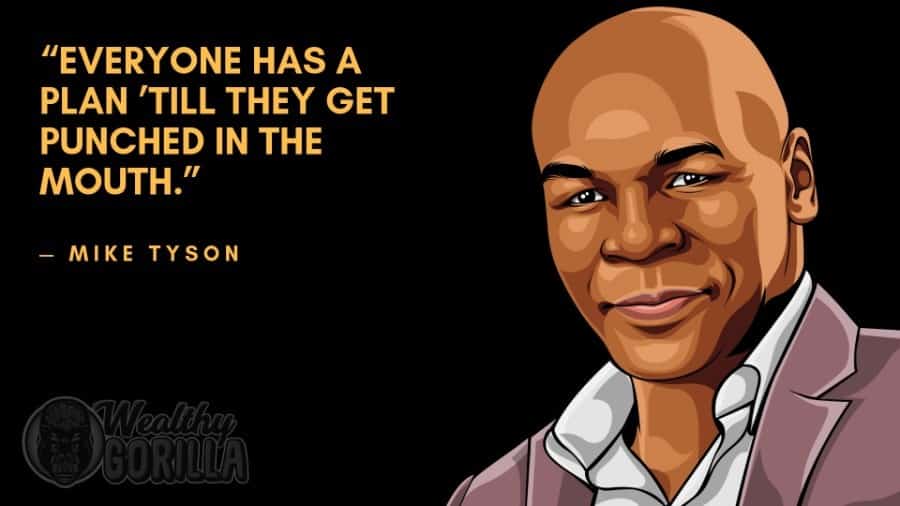 “Everyone has a plan ’till they get punched in the mouth.” – Mike Tyson 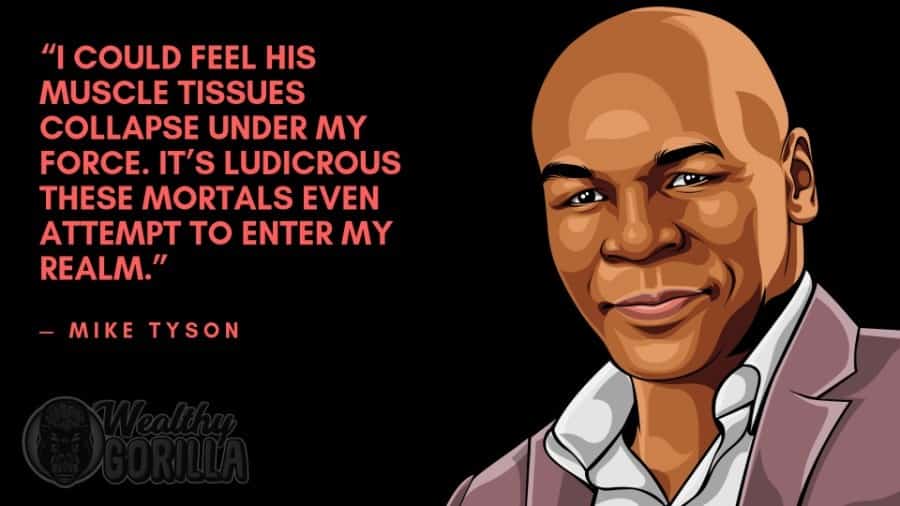 “I could feel his muscle tissues collapse under my force. It’s ludicrous these mortals even attempt to enter my realm.” – Mike Tyson 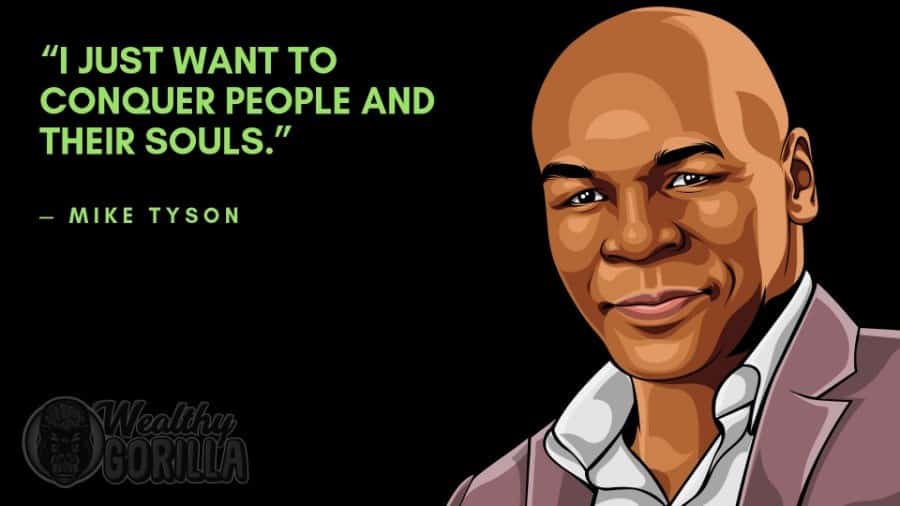 “I just want to conquer people and their souls.” – Mike Tyson 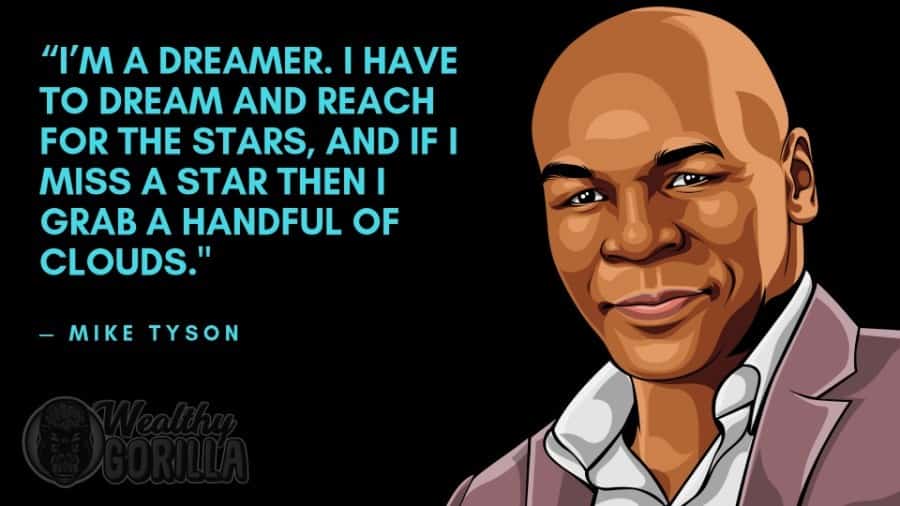 “I’m a dreamer. I have to dream and reach for the stars, and if I miss a star then I grab a handful of clouds.” – Mike Tyson 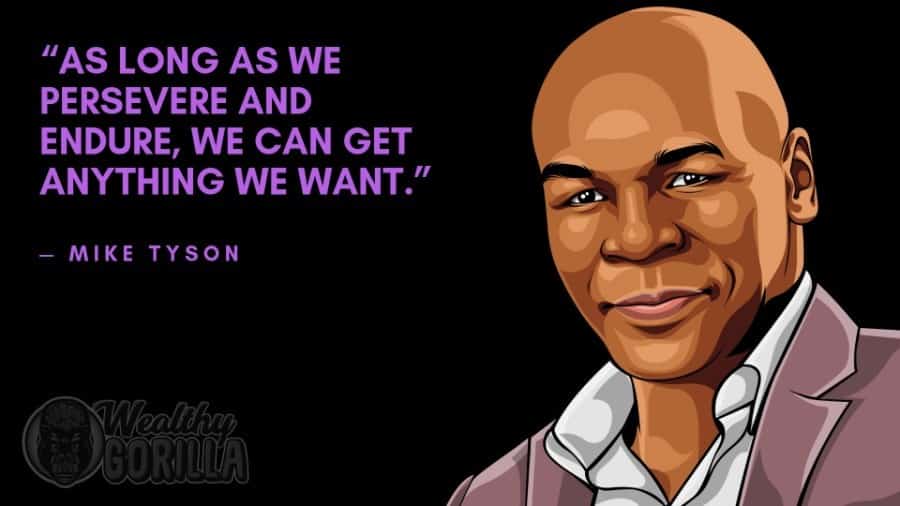 “As long as we persevere and endure, we can get anything we want.” – Mike Tyson 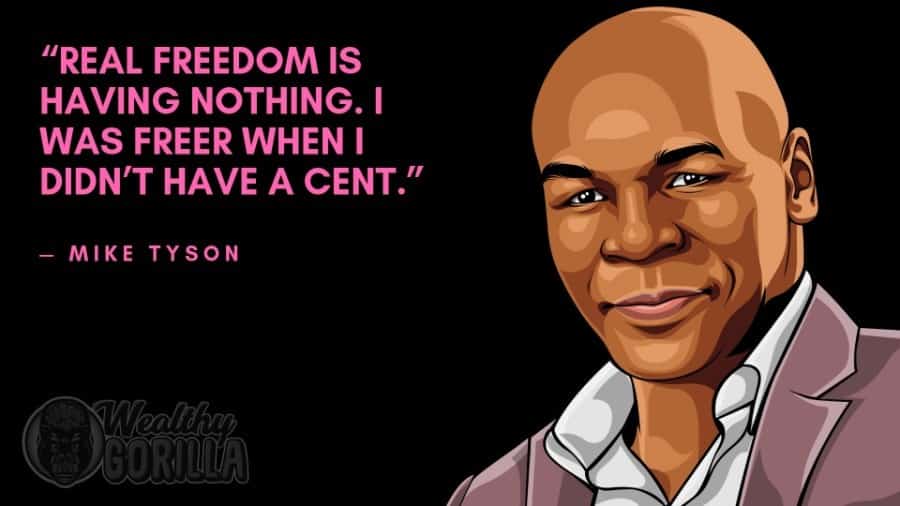 “Real freedom is having nothing. I was freer when I didn’t have a cent.” – Mike Tyson 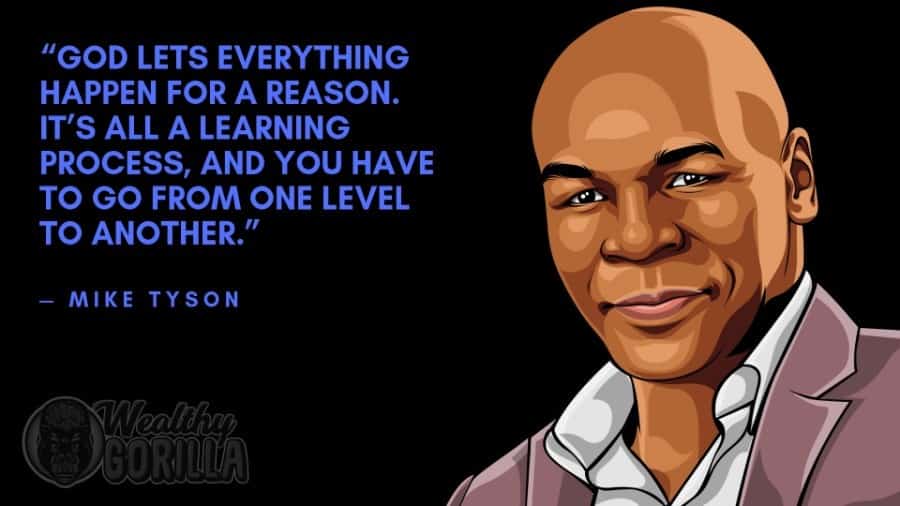 “God lets everything happen for a reason. It’s all a learning process, and you have to go from one level to another.” – Mike Tyson

3 Keys to Success from Mike Tyson

So what can we learn about success from Mike Tyson? Here are 3 keys to success, that we featured in our article on Mike Tyson’s best lessons:

1. It Starts With Your Mindset

You may not have the skill at the moment to succeed with your goals, but as long as you have the right mindset, eventually you will develop the level of skill needed to achieve that success.

2. Be Willing to Work Hard

It’s very easy to give into the temptation of skipping something one day; training, extra hours of work, studying and such.

Tyson would not give in to any temptations that would stop him from putting in the extra work needed. Whilst you’re out partying and goofing off, someone else out there is working hard.

It’s very easy to have a desire for something, or your own dream. All it takes is a little bit of imagination. Nearly everyone has some sort of end goal or dream, but half of them aren’t committed to working towards it.

Although Mike Tyson has struggled during his career with multiple issues, he still remains one of the greatest boxers of all time. Today, Mike Tyson’s net worth is just $3 million.