CHAOS Mike Tyson dropped Lou Savarese with his first punch, won the fight after 38 seconds and even knocked the referee over at Hampden Park in 2000 before needing police escort out

Mike Tyson has had some bizarre fights – from biting Evander Holyfield’s ear to trying to snap Frans Botha’s arm – but the craziest ending to any of his entertaining bouts came when he visited Glasgow in 2000, knocked out Lou Savarese and floored the referee, all inside one chaotic minute.

As the contest was called off in the first round, Tyson tried to land brutal haymakers after the stoppage, knocked down UK official John Coyle, somehow avoided disqualification, said he wanted to eat Lennox Lewis’ children in a memorable post-fight interview, then was given a police escort straight to the airport to get him out of Scotland. 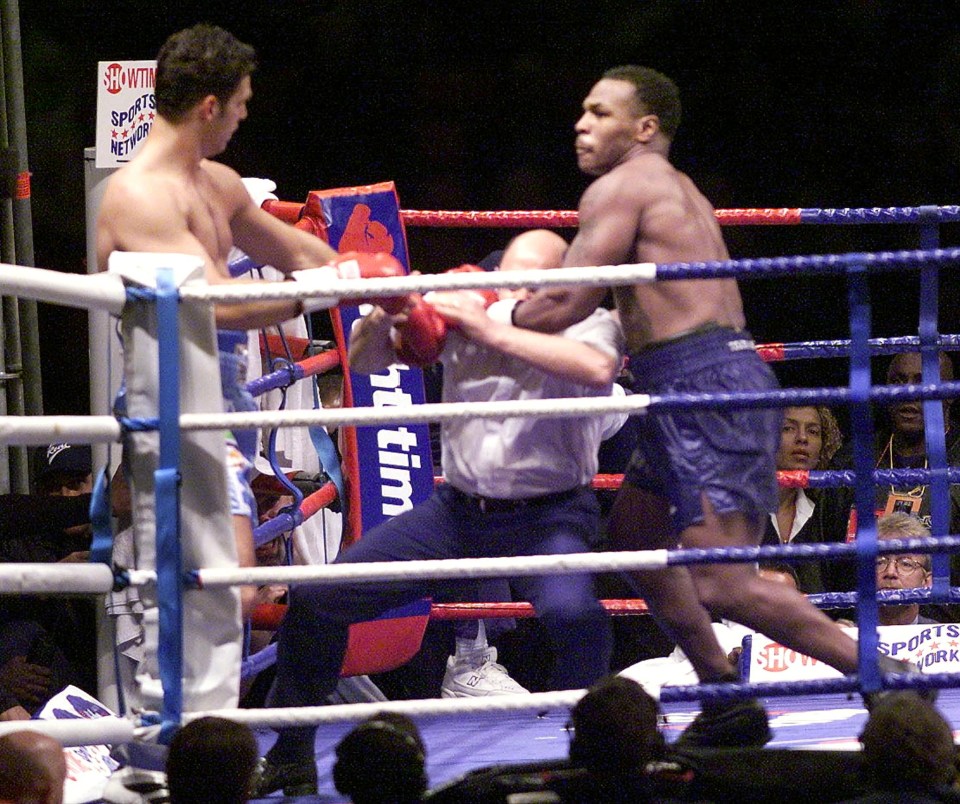 Tyson first fought in Britain in January of 2000 and that event was a box-office hit. He was given a hero’s welcome when he visited Brixton, then stopped Julius Francis in two rounds in Manchester. But when promoter Frank Warren brought him to Hampden Park in the summer, Tyson’s mood had turned. “As soon as he landed, I knew this was a different animal I was dealing with,” Warren later reflected.

The killing of his friend and former bodyguard, Darryl Baum, had deeply affected Tyson. There were also rumours (never confirmed) of a physical altercation with Warren over an unpaid $2.5million jewellery bill stemming from his first UK visit. Warren was sporting a notably bloodshot eye on fight night when a glowering Tyson walked to the ring in the rain.

Savarese was actually a solid opponent who’d gone the 12-round distance with an aged George Foreman. But the 33-year-old Tyson showed some of his vintage skill to floor the Italian-American with his very first punch; ducking under a pawing jab and springing up to land a left hook high on the temple which sent Savarese sprawling.

He gamely got up but Tyson was on him like a shark tasting blood, his array of hooks and uppercuts causing referee Coyle to leap between the pair to end the fight. Alarmingly, this was not the end of the violence. Tyson kept trying to land blows and actually manoeuvred around the official, and threw a left hook which missed Savarese and clobbered Coyle, sending him briefly to the canvas.

Iron-jaw John instantly leapt up, however, and managed to belatedly end the fight after only 38 seconds. It was Tyson’s second-fastest KO – the 22nd first-round knockout of his career – but his cornermen looked nervous that he was about to be disqualified, until Coyle belatedly raised a snarling Tyson’s fist.

Still, the drama was not over. In his post-fight interview with Showtime’s Jim Gray, a fired-up ‘The Baddest Man on the Planet’ went on one of his most infamous rants. “Lennox Lewis, I’m coming for you,” Tyson seethed about his main heavyweight rival. “I only trained probably two weeks or three weeks for this fight. I had to bury my best friend, and I dedicate this fight to him.

📅ON THIS DAY: Tyson & Savarese chaos🤯

⏪Back in 2000 Mike Tyson stopped Lou Savarese in 38 seconds of the first round… and wanted to keep fighting😲 pic.twitter.com/kbOrui7gh5

“I was gonna rip his heart out. I’m the best ever. I’m the most brutal, the most vicious, the most ruthless champion there’s ever been. There’s no one that can stop me. Lennox is a conqueror? No, I’m Alexander [the Great]… My style is impetuous, my defence is impregnable and I’m just ferocious. I want your heart. I want to eat his children. Praise be to Allah.”

Lord knows what the then child-less Lewis made of that, but at least concrete-chin Coyle calmly played down the controversy of the ending. “I shouted stop and dived in – Mike said he didn’t hear me, but he obviously couldn’t see me either!” he joked.

However, the referee added that disqualifying Tyson never crossed his mind as he had called the bout off before Tyson’s post-fight blows. “As soon as I shouted ‘stop boxing’ and dived in, the contest is over,” he concluded.

Sky Sports’ expert analyst, Barry McGuigan, was not having any of it, claiming Tyson should have lost. “He could have – and should have – been disqualified here,” McGuigan fumed. “He hit the referee on the head; he clubbed him with his arm. [Coyle] was there for five seconds trying to separate them – it was disgraceful… He’s out of control outside the ring and now it looks like he can’t control himself inside the ring either.”

McGuigan’s fellow former world champion, Jim Watt, was ever the voice of reason, adding: “That man is not a sportsman, he is a devil.”