Who is Tiger Woods’ son Charlie and why is he at the Masters?

ORLANDO, FL - DECEMBER 19: Charlie Woods flips the ball marker to his father, Tiger Woods, on the eighth green during the final round of the PGA TOUR Champions PNC Championship at Ritz-Carlton Golf Club on December 19, 2021 in Orlando, Florida. (Photo by Ben Jared/PGA TOUR via Getty Images)

With the eyes of every golf fan firmly fixed on Augusta National and the Masters, the one big question on everybody’s lips is, will Tiger Woods tee it up come Thursday’s opening round? Woods hasn’t featured on the PGA Tour since suffering life-changing injuries in a car crash in February 2021.

Ahead of his return, the 82-time PGA Tour winner confirmed over the weekend that he was making the trip to the opening major of the year, and revealed it would be a ‘game-time decision’ on whether he competes. Woods was also at the Georgia course last week, after jetting in for a practice round alongside fellow pro Justin Thomas and son Charlie.

Following his arrival for tournament week, Woods is expected to be once again to be joined by prodigy son Charlie who unsurprisingly is also a talented golfer. Charlie is 13-years-old and has already showcased to the golfing world his skills with a golf club.

Most notably he appeared alongside his legendary father at the PNC Championship last December, in what was Woods’ first public appearance back on a golf course since his accident. Unsurprisingly the Woods duo took the tournament by storm and were no doubt the pairing everyone wanted to get a glimpse of.

the young teenager proved to be a sensation across the 36-hole event, showing off identical playing mannerisms to those of his dad, including his iconic club twirl. Team Woods came away with a solid second-place finish behind John Daly and John Jr thanks to a scintillating final round 57, that included a tournament record 11 straight birdies. 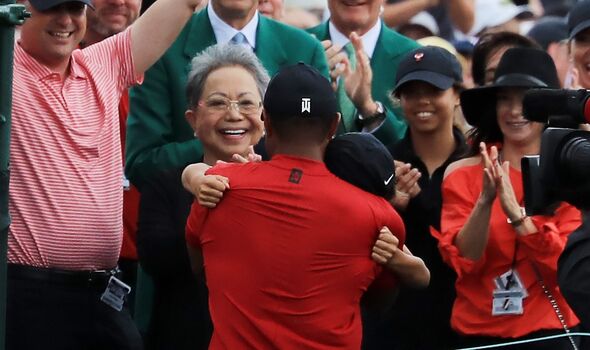 Young Woods is no stranger to Augusta National either, with his dad asserting himself as a Masters stalwart having won five green jackets throughout his career. His most recent one came back in 2019, and a then nine-year-old Charlie was there to witness the historic win.

Following his victory that once again capped off a mesmerising comeback from injury, Woods was flooded by fans at the 18th green before embracing young Charlie with open arms. The image of the pair – both in Tiger’s famous Sunday red – has since become synonymous with his 15th major triumph.