Tyson Fury lost it at press conference and made £100,000 bet with Derek Chisora then decided to stay silent like Dillian Whyte is doing now

Tyson Fury may be getting the silent treatment from Dillian Whyte ahead of their Wembley showdown, but it was once the undefeated heavyweight champ who gagged himself after the only time he truly lost it at a press conference.

Fury is famed for his pre-fight verbal assaults but those are all designed to sell a fight, unsettle an opponent and get Fury in the mood. 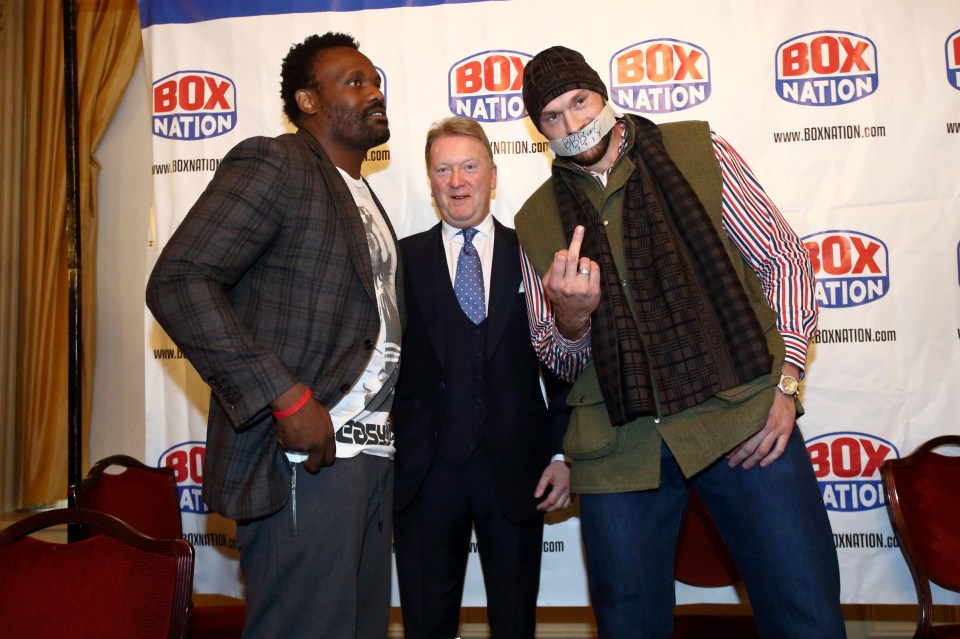 Almost every one of his media stunts are done with a glint in the eye, ‘The Gypsy King’ holding court and in complete control. Except when he squared up to Derek Chisora in 2014, a press conference that began with the pair shaking hands on a £100,000 bet on the outcome of their fight and ended with Fury losing his temper and almost his boxing licence after he tried to attack Chisora on stage.

It’s the one time Fury lived up to his name, a foul-tempered event which led to the British Boxing Board of Control charging the heavyweight with misconduct and slapping a £15,000 fine on him. Fury was allowed to keep his licence but responded by staying completely silent at the next media meeting, sat sullenly in his chair with a taped mouth and ‘BBBofC’ written across the gag.

He had been anything but silent a few weeks earlier. “I’m going to annihilate this motherf***er,” Fury said as he squared up to the equally volatile Chisora. “I’m here right here now, you f***ing tosser… What are you going to do about it, you f***ing prick?”

Uncle Peter Fury, his then trainer, put his arms around Fury to hold him back, while promoter Frank Warren and security got between the pair. By this stage Fury had removed his tracksuit top and was reaching round with Mr Tickle-length arms, trying to get his hands in Chisora’s face. And he did not want to give Del Boy a tickling. “I’ll knock him out right now,” ranted Fury. “I’ll beat that bitch up right here!”

Take it from someone who was there: this felt different from the usual pre-fight hype where a promoter winks and their fighter on cue flips over a table with the cameras rolling. Fury seemed genuinely on edge, a year of postponements and frustrations finally bubbling over.

When questioned by one reporter over his language, Fury replied: “I don’t give a f*** how many women and children are in the audience. We’re getting near to the fight and I’m in fight mode; kill mode. If you don’t like the station, change the channel, b****.”

Harry Kane attends the Masters, while Canelo Alvarez watches on his phone in gym 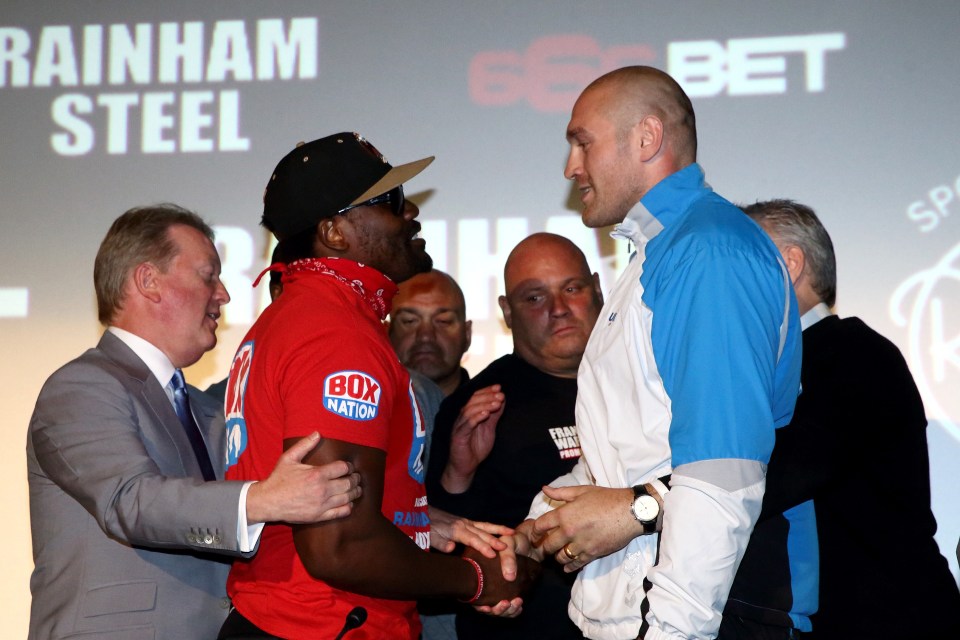 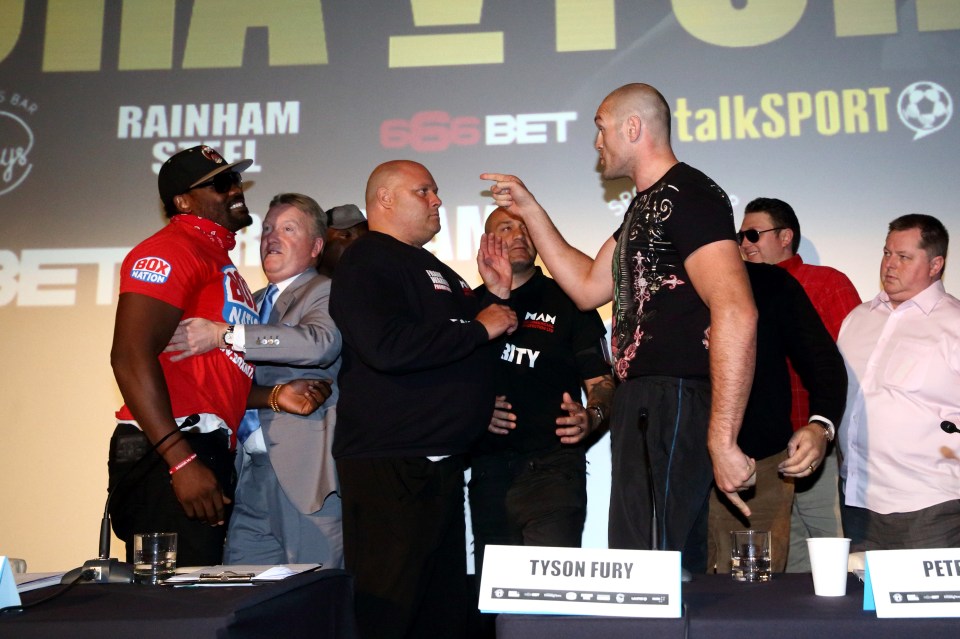 The boxers had at least shaken on their £100,000 side bet, though Chisora seemed keen to knock off a zero. “We can accept anything he wants [but] £10,000 is a better number,” he said. “We don’t want to chuck money around and people think these guys are show-offs… People are struggling to get that money.”

When Chisora is the voice of reason, you know you’re in an alternative reality. So what was truly behind Fury’s spew of rage? Well, the year before had featured so many fights falling through that Fury claimed he was ‘broke as a joke’ and might be unable to pay the BBBofC fine until after he had received the Chisora payday.

It might seem bizarre given all that Fury has achieved since; the seven-figure purses for fighting Deontay Wilder and the minimum £25million he’s guaranteed for taking on Whyte. But the Fury of 2014 was a long way from the pay-per-view star he is today.

In 2013, he was a brash, big-mouthed heavyweight who’d picked up the British heavyweight title but had been floored by cruiserweight Steve Cunningham in his last outing and was utterly unproven at world level. When he signed to fight David Haye, he was a significant underdog. After all, ‘The Hayemaker’ was a two-weight world champion and while Fury had won a tough 12-round decision over Chisora (in their first fight in 2011), Haye had easily blasted the same opponent out in five rounds.

As odd as it seems in hindsight, Haye by KO was the widespread pick. Still, Fury revelled in the mainstream spotlight, branding his handsome rival a ‘tart’ who was more interested in fame than boxing. Devastatingly for Fury, his shot at the big time stalled. Haye pulled out of the fight twice, first with a cut in the week before fight night then – more seriously – with a shoulder injury that required surgery and wiped out the rescheduled date.

Fury was out of pocket to the tune of £5million – life-changing money for a man with a young family. Fury described it as: “Being so close to having a winning lottery ticket, then realising that you’ve lost the ticket. That’s how I felt.”

Instead he was left with a far less glamorous contest in the form of a rematch with Chisora – and even that fight fell through on its original date after Del Boy fractured his left hand in his final sparring session. 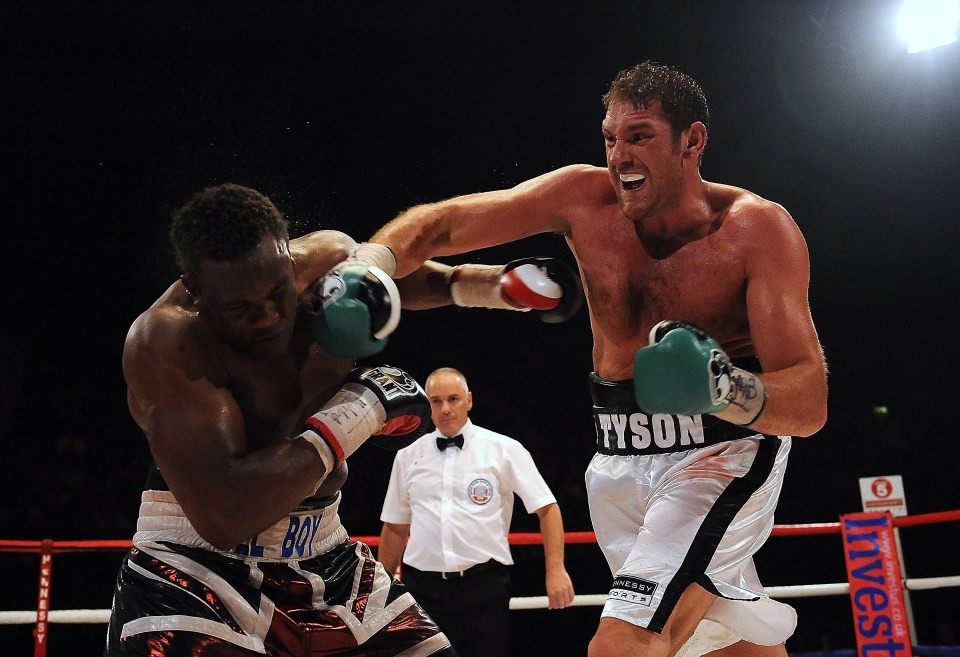 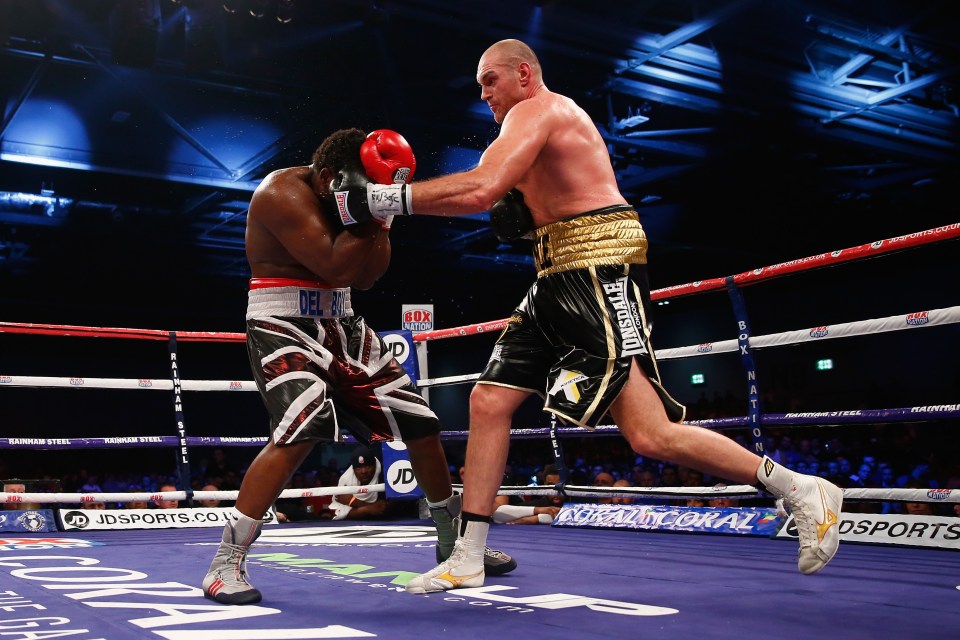 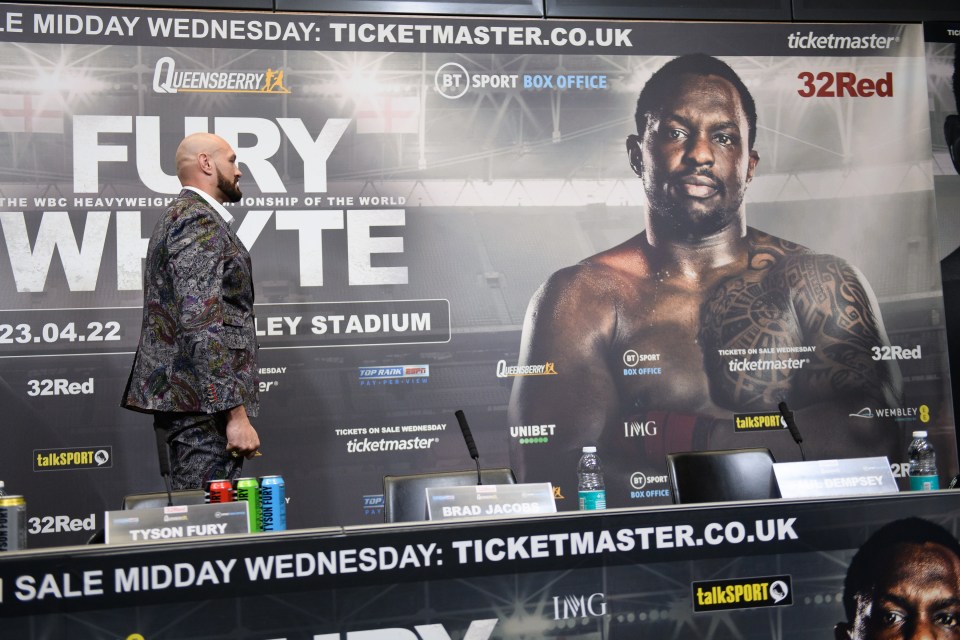 Three postponements in the course of 18 months and only a KO of Joey ‘Who?’ Abell to his name. No wonder the then 26-year-old was bubbling over with vitriol and resentment in the build-up to Fury-Chisora II. A heavyweight who wanted the recognition – and payday – that came with fighting a Haye or a Wladimir Klitschko was being forced to go over old ground.

However, if Fury showed a darker, more aggressive side to himself before the Chisora rematch, on fight night he showed a whole lot more. Fury was expected to win at London’s ExCeL but how he took apart Chisora was eye-opening. Switching seamlessly from southpaw to orthodox, he controlled every element of the bout, the 6ft 9in Mancunian keeping his shorter foe on the end of the jab and tying him up in close.

After 10 one-sided rounds, Chisora – one of the heavyweight division’s great warriors – was pulled out on his stool between rounds. It may not have been the fight Fury wanted, but in the three years since the first Chisora fight, the clumsy, sloppy heavyweight who had won that bout was showing himself to be a far trickier and more versatile challenge. Almost a year to the day on from his KO10 of Chisora, Fury was upsetting Wlad Klitschko in Germany and launching himself to no.1 in the division.

Top of the heavyweight tree is the position Fury finds himself in before he faces Whyte on 23 April, live on talkSPORT. But for all his talk of “’Frillian Whyte-knickers’ and one-man press conferences, we may never see a Tyson Fury as genuinely enraged as the one who really did lose his cool back in 2014.