An aphorism states, “Behind every successful man, there is a strong woman.” So likewise, famous basketball player LeBron James strong woman, is undoubtedly his mother, Gloria James. They both are present in each other thick and thin.

Gloria Marie James is the mother of LeBron James, one of the greatest and most celebrated basketball players in NBA history. It truly is a moment of pride to be a mother of such an impeccable son.

Throughout the beautiful journey of LeBron James, there is a big hand of his mother, Gloria. The struggle she had to endure to raise LeBron as a single mother is excruciatingly painful and histrionic.

But in the end, every struggle and sacrifice she made was worth it. After the success of her son, Gloria has had her fair share of time in the limelight.

Many of us can be curious about the mother’s life who gave birth to a star who has her own story worth noticing.

Gloria James’ life story is a story of many unheard single mothers out there. However, her story can inspire many single parents and teenage girls who got pregnant early.

In this article, we will explore deep into the life of Gloria James, born in Akron, Ohio.

But before all that, let’s get to know her better by knowing quick facts about Gloria.

He is also the first player who has won NBA championships with three franchises; the Miami Heat, the Cleveland Cavaliers, and the Lakers.

Besides playing basketball, LeBron has assembled additional fame and wealth from numerous endorsements. He has actively featured in books, documentaries, and TV commercials.

As a single mother, Gloria Marie James raised LeBron, who turned out to be a humble and exemplary basketball player. Nevertheless, the tribulation of her raising a child at a very early age is very heart-wrenching.

Yes, Gloria James, mother of Lebron James, had her first and only son when she was only 16 years old. LeBron’s biological father, Anthony McClelland, abandoned them. Therefore, his father was never involved in his life.

LeBron James is wholly devoted to his mother more than a basketball. She was always readily available to him, that she never made him feel the absence of his father.

Sadly, Gloria had to raise her child on her own at a very early age. Although, she had her mother, Freda James, to accompany her uplift LeBron.

But unfortunately, Freda passed away due to a heart attack on Christmas morning when he was only three years old.

Gloria was 19 years old when her mother Freda passed away. All this left her to raise her son all alone as a single mother.

We can understand the difficulty and turmoil of raising a child at a very early age. But, in addition to that, Gloria was also a single mother.

When LeBron James was five years old, the city bulldozed their house. Gloria didn’t have any college degree and adequate education to land herself a stable source of income.

As a result, their small family had to back and forth from apartment to apartment for several years. LeBron had to shuffle from school to school, where he could only make transitory friendships.

During the fourth grade, LeBron missed out nearly a hundred days of school because he didn’t have any source to reach out to there. However, his mother’s constant efforts and love always helped him to drive forward.

Like every mother, Gloria knew that her son needs more stability in his life. Therefore, at that point in her life, she had to make the hardest decision. She had to sacrifice her son for a better future that every child deserves.

Finally, at the age of 24, when LeBron was nine years old, Gloria decided to send her son away with a different family. She departs with her only child. She sent him away from her to live with his football coach, Frank Walker, and family.

If Gloria had not sacrificed her son for his better future, we would never have seen one of the elite basketball players, LeBron James, in the world.

IT WAS INDEED “BIG FRANKIE” WHO INTRODUCED LEBRON TO BASKETBALL.

Gloria James said, “It was hard, but it was not about me. It was for him. At that time in life, he required stability.”

After a few years, finally, the continued struggles of both LeBron and his mother were ceasing. LeBron was eventually gaining fame and success. So it was ultimately, every ounce of their hard work was paying off.

A few months before LeBron got drafted in the NBA, in 2003, Gloria gifted her son a $50,000 Hummer H2 for his 18th birthday. However, it was later found out that she took a loan out for buying that gift.

The gift even led to quite a stir with the Ohio School Athletic Association and almost cost LeBron’s high school eligibility. Since OSAA prohibited gifts of greater value than $100k. However, he was excused, and the case didn’t go further ahead.

Therefore, they did an investigation regarding the funding of such a lavish gift. Gloria claimed that she took out a personal loan of $50,000 to purchase a vehicle, which was disputable. Because at that time, they lived in public housing in Akron.

Gloria’s ex-partner Anthony has an extensive criminal record. He was found guilty of theft and various other offending activities. Despite they never had a serious relationship.

He was a famous basketball player at the high school where Gloria went. They both were dating during the 1980s.

LeBron spent a lot of years agitating his father. He felt his father betrayed both his mother and himself. As he grew older and wiser, he transmuted his anger towards his father into motivation.

He made sure that he wouldn’t treat his children like his father had. But, up to this point, he is adamant not to meet McClelland.

The most celebrated NBA superstar player LeBron James gives all the credit to his mother, Gloria James, for whatever he has accomplished in life. He has nothing but profound respect for his mother, who upbrought him individually.

Gloria was a mother, father, and everything for him. Growing up in a single-parent household and lively seeing his mother’s struggle had made him only stronger. 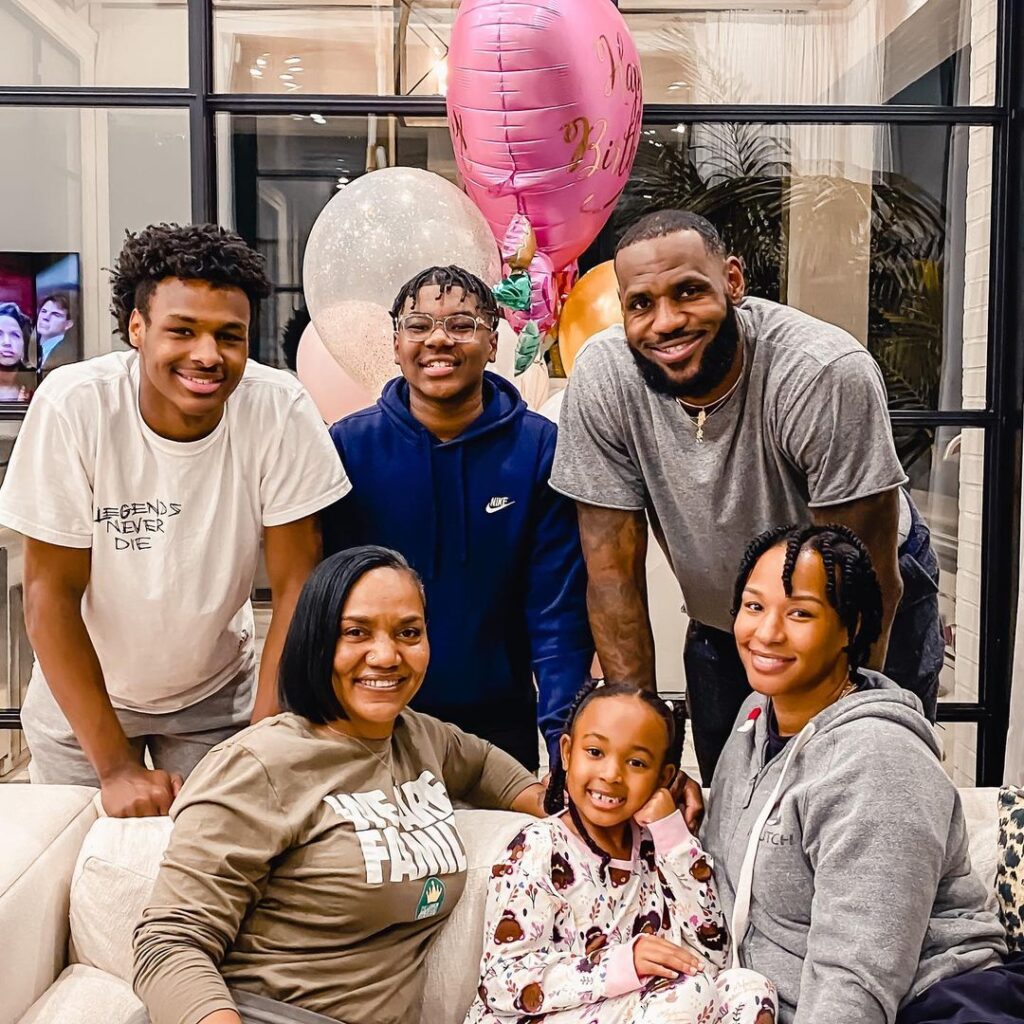 Whenever his mother is not present in his game, he makes sure that he gives the immediate good news via face-time.

For example, during his fourth NBA championship, he face-timed his mother, reflecting on how’s she inspired him.

James never forgets to exchange a heartfelt message about his mother whenever he gets awarded and recognized somewhere.

Gloria also escorts LeBron in the activities of his foundation, LeBron James Family Foundation, in Akron, the city where he grew up.

As stated before, Gloria had her only son when she was a teenager. Since then, she has more emphasized raising her child as she was a single parent.

However, there was a rumor about her relationships that she had dated a few guys. Besides, she is not married yet.

In 2013, Gloria James was claimed to be in a relationship with Miami-based rapper Da Real Lambo. However, there is no official proof regarding the rumors about if they were ever married. 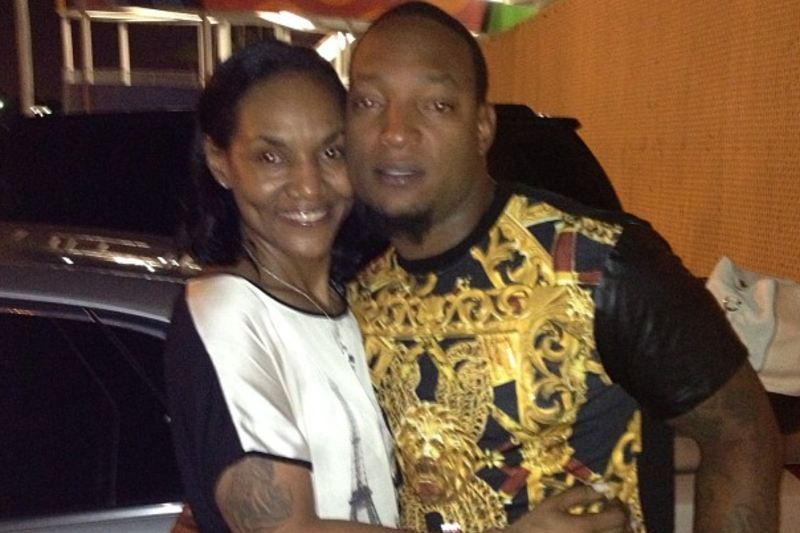 But, the rapper referred to her as his wife in few events when they were living together. He even threatened LeBron for coming between their relationship, referring to Gloria as his wife.

Eventually, they broke up when LeBron discovered that Lambo was cheating on his mother.

Lambo even said that James had an affair with Beyonce, due to which he didn’t invite the singer to his wedding. He also claimed that LeBron had a child with Sharon Reed.

Then, in the 2009-2010 season, wide rumors linked Gloria to her son’s then-teammate Delonte West, who later married Caressa Suzzette.

Although many denied these rumors, former NBA player Calvin Murphy revealed that his inside source from the team confirmed that the relationship rumor was true.

He also summarised that it was the catalyst for the horrible performance of LeBron James during the Celtics vs. Cavaliers match. A year later, Delonte was off to the Celtics on a million-worth one-year deal.

Gloria James’ life had been full of struggle. Since she had LeBron when she was a girl, she couldn’t complete her high school in Akron, Ohio.

However, her life meandered into a different path suddenly after her son reached a pinnacle of success.

At present, she earns more than $100,000 as a salary annually. Gloria James’ net worth is estimated to be approximately $2 million. Her net worth is an inspiration to many single-mother out there struggling to raise a child.

Gloria James’ net worth surged due to her career as an entrepreneur and being a celebrity mother.

In addition, Gloria earns a considerable amount of money via her media presence along with her son.

Gloria James is currently living a luxurious life. All thanks to her early struggle and upbrought of her highly talented basketball player son, LeBron James.

Gloria James lives in a Tudor brick two-storied home built around 1994, located in Akron, Ohio. It has around 12 rooms, including one family room.

Gloria James has accumulated massive fame as the mother of legendary basketball player LeBron James. During the period, she has gained respect from all around the world.

However, she has some of the controversies and unknown facts concealed. Here are some:

Gloria James is known as a fashion diva in her social media. After all, she had gone through, she truly deserves a lavish lifestyle. And her social media resembles the luxurious life she is living now.

The pictures she shares on social media are heartwarming. In addition, she gets a lot of compliments from her fan for her sense of fashion.

Besides this, she also has her website where she shares the details related to her field.

What does Gloria James do for a living?

Gloria James is a philanthropist, community advocate, and socialite. Despite that, she also earns through media presence along with her son LeBron James.

There were rumors regarding the marriage of Gloria James with her ex-boyfriend Miami-based rapper Da Real Lambo. However, the news was not officially out. So she was only in a few casual relationships.

How many children does Gloria James have?

Gloria James has only one child, LeBron James. She was a single teenage parent who raised LeBron all on her own after her mother’s death, Freda James. During that time, Gloria was only 19. However, she had LeBron at the age of 16.