Rafael Nadal admits his rib injury has been “disabling” as he prepares for his return to the court next week. Nadal suffered a stress fracture to his rib at the Indian Wells Masters in March.

He lost the final in straight sets to American Taylor Fritz. The Spaniard was then ruled out for up to six weeks to put his participation at the French Open in doubt.

However, he is set to return to action at the Madrid Open this week. Nadal has now opened up about how he has struggled because of the injury and has not been able to train much ahead of his comeback.

Speaking to the media in Madrid, the 34-year-old said: “I have trained very little, because the rib is very disabling and also very painful. I had two very bad weeks and afterwards it has been very, very disabling. 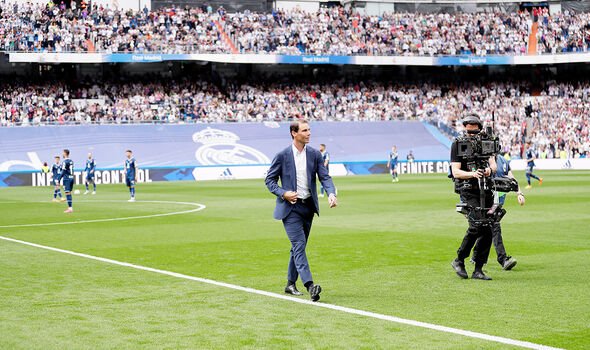 “I haven’t been able to do practically anything, but it’s here, at home, in Madrid…” Thirteen of Nadal’s 21 Grand Slam wins have come at the French Open.

This year’s tournament starts in three weeks and Nadal believes there is enough time for him to fully recover and be available for his favourite tournament. He added: “I have three weeks.

“So I trust that the daily training will help me to get ready. Here [in Madrid, at an altitude of 657 metres] the demand is maximum, but what can be done is going to be done.

“The most important thing is to be healthy, but I think that going to Paris I’m on time. Three weeks are enough to get competitive.”

Nadal upset the odds by winning the Australian Open in January to move ahead of Roger Federer and Novak Djokovic as the most successful male player in terms of Grand Slam title wins. Tennis coach and pundit Patrick Mouratoglou believes changes to Nadal’s game has led to the more recent success.

“First, Rafa’s game has become more and more aggressive,” Mouratoglou said. “Early in his career, he would win games by forcing long rallies from baseline.

“Now he is looking to step inside the court more, take control of the points and shorten the rallies to conserve energy. Third, he has added a new shot to his game.

“In the Australian Open final, we saw him use the slice a lot to bring [Daniil] Medvedev to the net. He even used the drop shot to make him doubt.

“Rafa has also improved his volley game, and now, you’ll see him come to the net. If he hadn’t made those changes, I believe that he wouldn’t be the player that he is today.”