Emma Raducanu has admitted there is a possibility she could have to miss next week’s Italian Open despite feeling “positive” after her exit in Madrid. The world No 11 was ousted by Anhelina Kalinina 6-2 2-6 6-4 in the round of 16 on Tuesday night.

Raducanu has been enjoying a successful first clay season, reaching her first quarter-final of the year in Stuttgart last week and dropping nine games en route to the third-round in Madrid. Her run at the Caja Magica came to an end against world No 37 Kalinina who overcame the ninth seed in two hours and 19 minutes.

After crashing out of the Madrid Open, the 19-year-old admitted she was still “positive” but had been struck by a back injury that left her with little chances to win, and could keep her out of the WTA 1000 in Rome next week. “I would have given myself a five percent chance of winning that match, and for it to almost happen, I think that was a positive thing,” the US Open champion said.

Speaking about her plans for the upcoming Italian Open, Raducanu couldn’t confirm she would definitely be making her debut in Rome after suffering with her back. She continued: “I’m not sure what I will do yet, whether I will go home yet or straight to Rome. The plan right now is to still go to Rome. I’m not sure when I start. Maybe Monday or Tuesday. I hope it’s enough time because it would be a real shame to miss it.”

But the world No 11 seemed in good spirits about her chances to recover in time for the next WTA 1000 event, adding: “I’m feeling pretty positive. A lot of the time with me it’s just overload and then two or three days’ complete rest and I’m OK to start training again.”

The back issue is the latest niggle Raducanu has had to face, suffering with blistering at the Australian Open and Billie Jean King Cup, retiring her match in Guadalajara with a leg injury and also struggling with a stiff back during the ‘Sunshine Double’. But the Bromley teenager said she was looking on the bright side and enjoying building her body up. 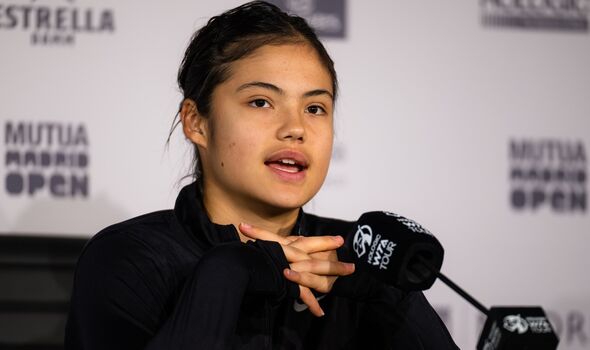 “I was kind of struggling a bit with my back, to be honest. Throughout the week I have been carrying some niggles, and it’s kind of just taking its toll, all of the matches at this kind of level,” she confessed. “I think that’s a good thing that I feel like I’m going through this and my body is building with each match I play.”

The Italian Open, another joint ATP and WTA 1000-point event, begins on Monday. If she plays, it is set to be Raducanu’s last clay tournament ahead of her French Open debut.