Novak Djokovic has been named the greatest men’s tennis player of all time by Stefanos Tsitsipas after winning the Italian Open. The world No 1 claimed his first title of 2022 with a 6-0, 7-6 (7-5) defeat of Tsitsipas on the Rome clay.

Djokovic is seeking to match Rafael Nadal’s tally of 21 Grand Slams at the French Open next month having been stopped from playing in the Australian Open earlier this year when he was deported due to his lack of Covid vaccination. And he heads to Roland Garros in great form on the red dirt.

This was a record-extending 38th Masters 1000 title triumph and he did not drop a single set in Italy despite being 4-1 down to Tsitsipas at one stage of the second set in the final. And the Greek rates his conqueror as the best ever to pick up a racquet over Nadal, who has the most Slams, and the Serb’s fellow 20-time major champion Roger Federer.

In a classy tribute to six-time Italian Open winner Djokovic, Tsitsipas said after his loss per Sportklub: “I have so much respect for him. Every single decision he has made, I understand it, even the ones in the past. I support them.

“He makes sure every single thing that he does is reaching as close to perfection as possible. Of course I cannot neglect that and not feel inspired by it because it’s professionalism to the fullest.

“In terms of talking about tennis legends and breaking records, when it comes to all these things, I personally think he’s one of the most professional and the best of them all.” 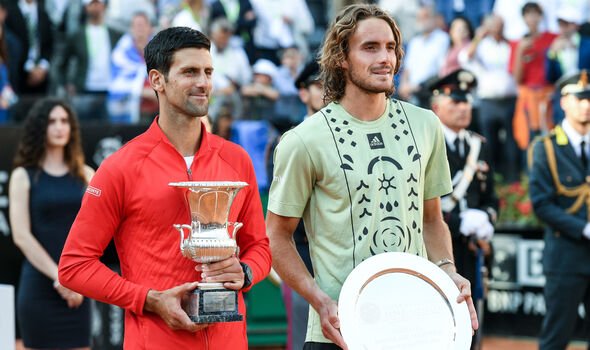 Nadal is currently battling a long-term foot injury that has prevented him from finding his best form on his favoured clay surface. He lost his second match in Rome having also lost in the quarter-finals in Madrid.

And Djokovic said after his straight-sets win: “I would rate myself as one of the favourites [for the French Open]. I go there with the highest ambitions, particularly after the way I played here. I really like my chances.

“To some extent it’s a relief [to win the Italian Open] because after everything that happened at the beginning of the year, it was important for me to win a big title, especially with Grand Slams coming up.”