After McLintock, John Wayne’s First Act! He Felt Like A ‘Fraud’

The 1960s and 1970s were lean years for Hollywood. The Paramount Decree had major studios in shambles, forcing them to divest their interests in movie theaters, ending the vertical integration that led to the prosperous Classical Hollywood era. The arrival of television began eating into theater audiences. On the cusp of the Hollywood New Wave film movement which would give directors more power, studios made one last grasp for control. In the spirit of 1939’s “Gone With the Wind” and looking to repeat the successful formula of 1959’s “Ben-Hur,” United Artists released a religious epic with the hopes of re-igniting theater attendance. They pulled out all the stops, including wrangling up one of Hollywood’s biggest stars from the western and action genre.

By 1963 John Wayne was one of the biggest names in Hollywood. He was coming off the successful Shakespearean western comedy “McLintock!” In his next role, he unwittingly took a small role in a film to square up a debt with United Artists studio. That film was the 4-hour and 20-minute religious epic about the life of Jesus Christ, “The Greatest Story Ever Told.”

The George Stevens movie was based on the 1949 book of the same name by Fulton Oursler and Henry Denker. The film cost $20 million to produce and though it was lauded for its technical accomplishments – earning five Academy Award nominations in technical categories – it was not a hit with critics or audiences.

If you’re asking yourself how John Wayne fits into the life and times of Jesus Christ, you’re not alone. Wayne himself found himself asking that same question after the movie was made. Not only did his performance lend nothing to the film, but it also left The Duke feeling like a fraud.

Wayne barely appeared and had no lines 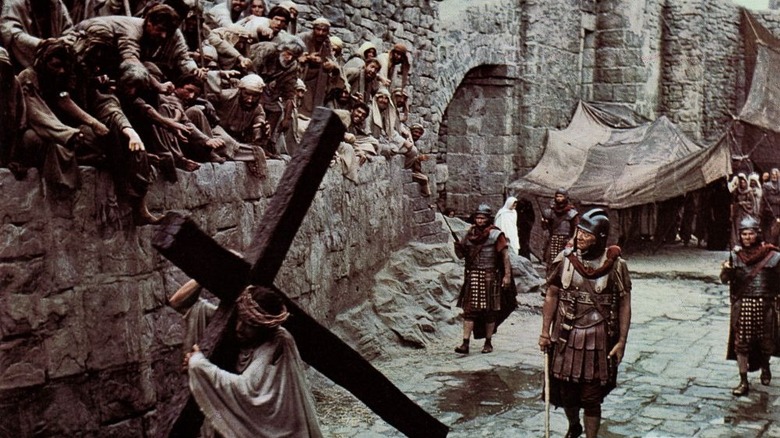 A few months after John Wayne wrapped on “McLintock!” at the beginning of 1963, The Duke jumped into his next project. But this was no ordinary project and no ordinary circumstances for a Hollywood icon. According to Michael Munn’s book “John Wayne: The Man Behind the Myth,” the role was a small cameo with no lines.

In the first-century epic “The Greatest Story Ever Told” Wayne played a Roman Centurion who ushers Jesus as he carries the cross to Calvary. Wayne’s minuscule impact on the intense scene left him feeling more of a disciple than a leader. The appearance left a bad taste in Wayne’s mouth, and he decided to make some changes during filming. Wayne said:

“They put me in this heavy Roman uniform and when I did the chin straps up, I looked exactly like every other Roman soldier there. I figured that since they were using my name to bring in the customers, they ought at least to be able to see me, so I left my chin strap undone.”

Wayne wasn’t the only pawn in the studio’s attempt to use big names to lure audiences to the theater. 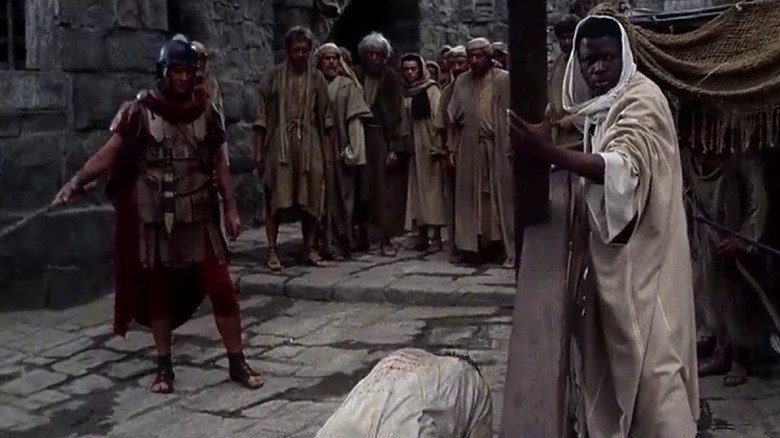 Wayne was more of a publicity pawn than anything else. As the enormous production grew, United Artists wanted big names attached to the project to ensure a box office draw. Scenes with late additions that included Wayne and Sidney Poitier could only be pigeonholed into the last 15 minutes of the lengthy production.

The experience left Wayne feeling like a fraud. He said:

“I really was nothing more than an expensive extra. I had no lines to say, just like Sidney Poitier who they also got in at the last minute to play Simon of Cyrene. And there was Carroll Baker with no dialogue. We were all fu**ing extras. I only did two days’ work.”
In the end, Wayne did have one line of dialogue, recorded in post-production after filming was complete. If the line sounds awkward in the film, it’s because it was. Wayne resisted, telling Stevens, “I’ve got nothing to react to, so if I screw this up, don’t blame me.” Nonetheless, they recorded the dialogue, and in the movie you hear The Duke — in his Southern drawl — saying of Jesus, “Truly this was the son of God.”

The studio’s request for more star power backfired. The New York Times noted, “And most distracting are the frequent pop-ups of familiar faces…Most shattering and distasteful of these intrusions are the appearances of Carroll Baker and John Wayne in the deeply solemn and generally fitting enactment of the scene of Jesus carrying the cross to Calvary.”

Even John Wayne himself knew while filming that his placement in the movie was fraudulent and added nothing to the movie. Perhaps Charlton Heston, who played John the Baptist in the film, said it best, “There are actors who can do period parts and there are actors who can’t. God knows Duke Wayne couldn’t play a first-century Roman.”