This world-class athlete speaks and acts like Aristotle and Confucius. We can all learn something from him.

Sports, it’s been said, reveals character. It also reveals something else: philosophy.

There’s no better example of this than Rafael Nadal, the 35-year-old professional tennis player who’s competing this week at the French Open. Nadal is not just a gladiator on the court — he’s a philosopher at heart.
You may know Nadal’s tennis credentials. The Spaniard has won a record 21 Grand Slam titles and 13 French Open tournaments. He’s revolutionized the sport with his ferocious topspin forehand, his freakish strength and his relentless drive. He is arguably the greatest male tennis player ever.
But it is Nadal’s mind that may separate him from his greatest rivals. His ability to play with physical pain, to come back from devastating injuries, to problem-solve during a match — all are part of his greatness. So is his attitude — his visceral delight in competing, whether he wins or loses.
He also has a rare philosophical approach to tennis and life that one sportswriter described as a “model of humility, empathy and perspective.”
It turns out that Nadal, who may be playing in his last French Open, embodies many of the virtues taught by philosophers and sages such as Aristotle, Confucius and the Stoics. Even if you don’t play tennis, there are at least four lessons this great champion can teach. 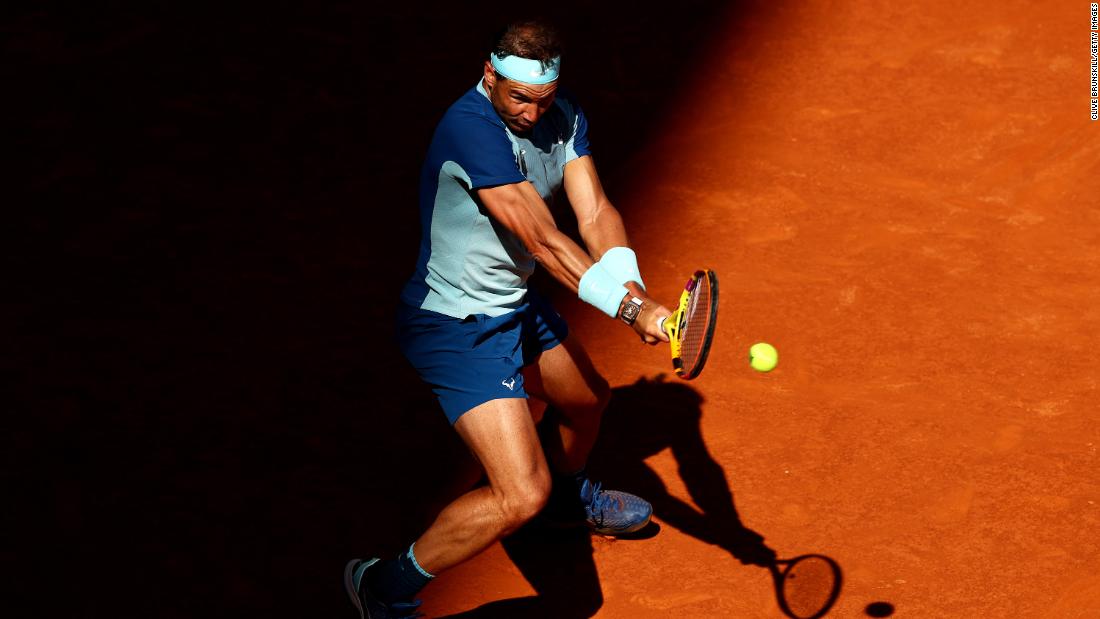 Rafael Nadal hits a backhand in his marathon third-round match against David Goffin of Belgium at the Madrid Open on May 5, 2022.

The moment: In May, Nadal returned to competition at the Madrid Open after suffering a stress fracture in one of his ribs earlier in the year (he played an entire match with that fracture in a previous tournament rather than forfeit the match).
Though opponent David Goffin held four match points against him, Nadal came back and won a grueling match that lasted three hours and 10 minutes. Afterward Nadal said:
“I always said it many, many times, you have to learn how to live with these kind of moments, and also to enjoy this suffering. It’s what we work for, for thrilling moments.”
What it means: Nadal was born into an affluent family. He hails from Mallorca, Spain, an idyllic vacation spot off the coast of Spain. He never struggled to break into the professional tennis through the traditional route of playing small tournaments in far-flung places and staying in cheap hotels. He was a teenage prodigy who has never suffered in the conventional sense.
And yet there is no contemporary athlete who seems to relish an almost monkish attitude to self-denial and suffering as Nadal. He has played with constant pain throughout his career, battled in some of the most exhausting matches in tennis history and excels on clay courts, a surface which places a premium on endurance. Enjoying suffering is a theme he returns to in many of his interviews.
It’s also a theme in several philosophical traditions, which insist that suffering and pain play an important role in developing a virtuous moral character, says Francisco Javier Lopez Frias, associate professor of kinesiology and philosophy at Penn State University.
Aristotle and other philosophers taught that “suffering often accompanies morally good actions or even that the worthiest moral choices always involve pain,” Frias says.
“Athletes often experience suffering as instrumentally and intrinsically good,” Frias says. “A victory that requires an athlete to fight until the end is perceived as more valuable than a victory that involves little suffering. Nadal is a perfect case study for philosophers who examine the importance of pain in athletes’ experiences. He seems to place greater value on victories achieved in difficult, painful situations.”

Lesson 2: The importance of rituals 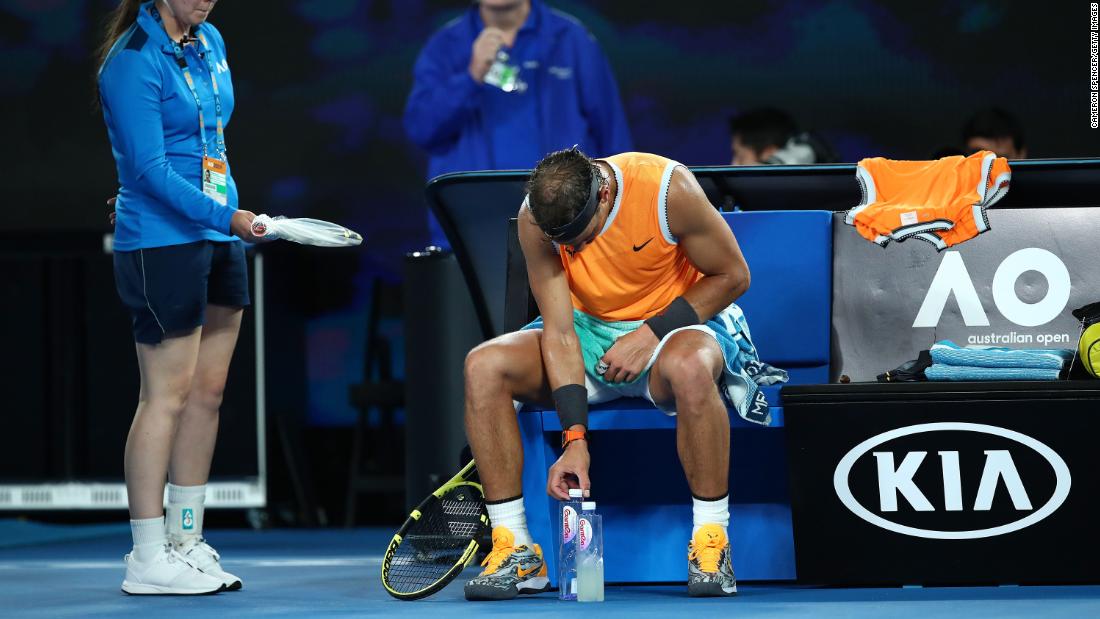 Rafael Nadal adjusts a water bottle during his quarterfinal match against Frances Tiafoe of the United States at the 2019 Australian Open in Melbourne.

The moment: At the 2015 Australian Open, Nadal was closing in on a victory when something unexpected happened. His water bottles, which he had arranged in precise positions near his chair, fell over. A ball boy dashed over to return the bottles to their upright position, with the labels facing the court as Nadal had intended. Even Nadal had to laugh along with the spectators because his water-bottle routine is part of a well-known array of on-court tics.
One newspaper even devoted a feature to identifying 19 “bizarre” on-court Nadal rituals. They include: always walking on the court with one racquet in his hand, waiting until his opponent first crosses the net during changeovers and tugging at the back of his shorts in the exact same way before he serves. Some people call him obsessive-compulsive, but Nadal says there’s a purpose behind his routines.
“I put the two bottles down at my feet, in front of my chair to my left, one neatly behind the other, diagonally aimed at the court. Some call it superstition, but it’s not,” he once said. “If it were superstition, why would I keep doing the same thing over and over whether I win or lose? It’s a way of placing myself in a match, ordering my surroundings to match the order I seek in my head.”
What it means: Confucius, China’s greatest philosopher, would have given Nadal a high-five. The 5th-century philosopher emphasized the importance of developing rituals to lead a good life. For example, he always straightened his mat before sitting down and would never teach while eating. He said little rituals in our lives cultivate good character.
In Nadal’s case rituals help him stay calm in incredibly stressful situations. They can do the same for others outside the tennis court.
Rituals are transformative, according to Confucius, because “they allow us to become a different person for a moment,” and they create a “short-lived alternative reality that returns us to our regular life slightly altered,” Michael Puett and Christine Gross-Loh wrote in “The Path: What Chinese Philosophers Can Teach Us About the Good Life.”
“He [Confucius] wasn’t just straightening his mat because he liked things to look neat,” they wrote. “He understood that seemingly minor actions such as arranging the place where people would sit would create a different environment that could affect them profoundly. The modern-day equivalent of the mat ritual might be our dinnertime routines: When we set the table, perhaps laying our placemats and napkins, even lighting candles, we step out of our regular lives and create an alternative reality for ourselves and those with us.” 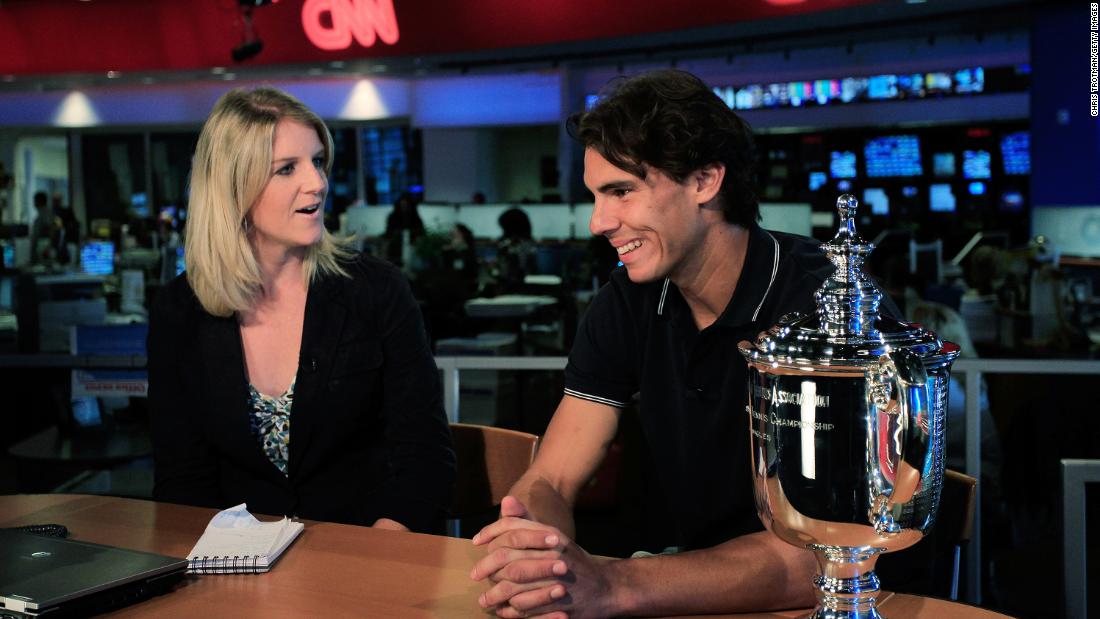 Rafael Nadal is interviewed by anchor Candy Reid of CNN International on September 14, 2010, in New York City after winning the 2010 US Open.

The moment: When Nadal won the 2010 US Open at age 24 he became one of the youngest male players to capture all four Grand Slam titles. After the match, someone asked him if he considered himself better than his great rival, Roger Federer. Nadal said discussions about him being superior to Federer were “stupid” because it was obvious that Federer was better.
Some athletes build their reputation on their confidence. Muhammad Ali declared himself the greatest. Michael Jordan reveled in his cutthroat competitiveness. But if one could distill Nadal’s sports brand into one word it might be humility. It’s a constant theme in his career.
He rarely if ever touts his achievements, refuses to put down his rivals, travels in public without large entourages and lingers after matches and practices to sign autographs. That reputation is one reason why Nadal was awarded the Stefan Edberg sportsmanship award by his fellow players for four consecutive years.
“People sometimes exaggerate this business of humility,” he once said at a press conference. “It’s simply a question of knowing who you are, where you are, and that the world will continue exactly as it is without you.”
What it means: The importance of humility or modesty can be traced back to Aristotle and Christian thinkers such as Thomas Aquinas, Frias says.
“Those who exhibit temperance prevent their appetites from both fully controlling their actions and their appetites being irrelevant to their actions,” he says. “Like Aristotle, Aquinas connects humility to the ability to wish what is fitting to our capacities, accepting the limitations God has given us.
“Again, humility and asceticism go hand in hand. Ascetic individuals discipline themselves to keep their appetites under control and to concentrate on what truly matters. In exercising humility, Nadal reinforces the ascetic traits of his moral character. “

Lesson 4: Don’t worry about what you can’t control 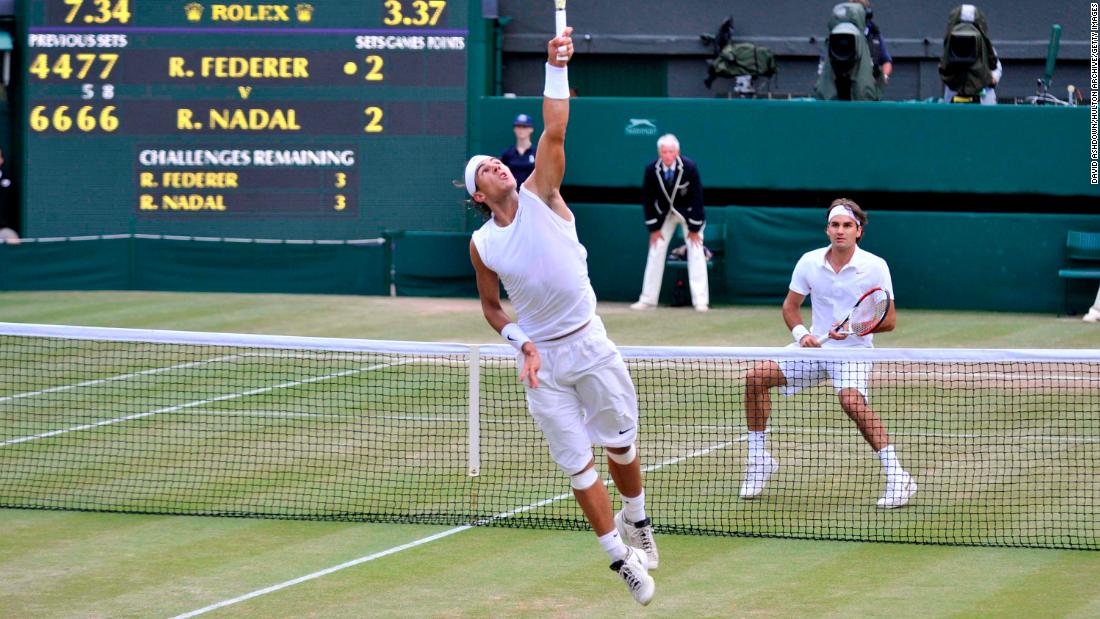 Rafael Nadal reaches for a shot against Roger Federer in the Wimbledon men’s final on July 6, 2008, considered by many the best tennis match ever played.

The moment: The 2008 Wimbledon final between Nadal and Federer is widely considered the greatest tennis match ever played. The match had everything: jaw-dropping shotmaking, rain delays and a dramatic finish as daylight was fading on Wimbledon’s Center Court.
It was also a match that Nadal almost lost. When Federer stormed back from a two-set deficit to tie up the match, many expected Nadal to be emotionally crushed. But during a break in the match, Nadal said something interesting to his coach and uncle, Toni Nadal.
“Relax,” Nadal told Uncle Toni. “I’m not going to lose this match. Maybe Federer will win, but I’m not going to lose it.”
What it means: Nadal’s quote reflects the wisdom of Stoicism, a philosophy born in ancient Greece that “embraces self-mastery, virtue and indifference to what we cannot control.”
Nadal has taken the same stoic attitude to the ups and downs to athletic competition and fame throughout his career. It may be one reason he has competed at a higher level than many of his peers who have since retired, and why he has defied experts who said he wouldn’t play into his 30s because of his punishing style.
“Nadal seems to approach his matches quite stoically. He acknowledges that he cannot control the outcome of the match. The outcome depends on many variables, including luck and the opponents’ performance,” Frias says. “Not even his performance is within his control entirely. He can get injured or be outplayed by an opponent’s superior performance. However, he knows there is one aspect of his performance he can control: his dedication or effort.”
Nadal’s philosophy also reflects the way he sees his opponent, Frias says. The player sees sports as a “mutual quest for excellence.”
“In this view of sport, a competition is not a zero-sum game with only one winner,” Frias says. “Rather, everybody who engages in the competition benefits from doing so. After all, he has famously praised his opponents and talked about how much he’s enjoyed confronting them, even when they have defeated him.”
Father Time eventually defeats all opponents. At previous French Opens, Nadal was considered a lock for the title. But younger rivals are threatening to depose the man known as the King of Clay.
Whatever happens at this French Open, one outcome is certain. Win or lose, Nadal will react not just as an athlete but as a philosopher — with humility, temperance, and as someone who “enjoys the suffering” that comes with every noble pursuit of excellence.
Tags: AristotleChinese PhilosophersChristine Gross-LohConfuciusDavid GoffinFrancisco Javier Lopez FriasFrench Openking of clayMadrid OpenMallorcaMichael PuettPenn State UniversityRafael NadalSpainStoicismStoicstennisuncle Toni