John Wayne was buried with gorgeous quote at unmarked grave

John Wayne – otherwise known as The Duke – was a Hollywood legend. He starred in over 70 films and even won an Oscar for Best Actor in 1970 for True Grit.

So then, it was even more tragic when the star was diagnosed with stomach cancer in 1976. In just a few days it will be the 43rd anniversary of the star’s death, who lost his battle against the illness on June 11, 1979.

However, Wayne did not have the most traditional burial. His children, Patrick and Ethan Wayne, buried the star in Pacific View Memorial Park in California, USA. This is the same gravesite as some other incredible artists from over the years – including basketball player Kobe Bryant and singer Bobby Hatfield.

Before his death, Wayne requested his gravestone have the words “Feo, Fuerte y Formal” etched on it – a Spanish epitaph which means “ugly, strong, and dignified”. But, instead, his children left him in an unmarked grave so no one could bother him. 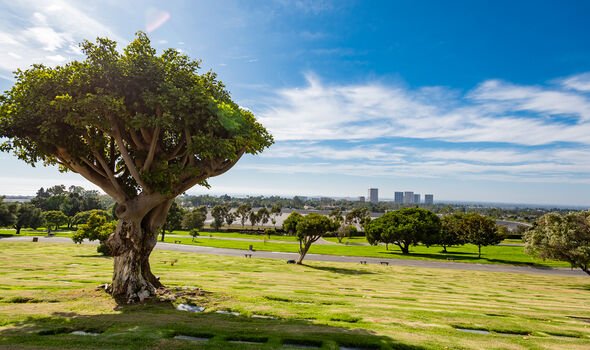 Ethan Wayne explained he did not want his father’s gravesite to become a tourist attraction for his fans.

He said: “You want him to rest in peace. We didn’t want to make a shrine. It’s more out of respect for the people that are out there. They don’t want their loved ones’ graves trampled on.”

But, almost 20 years later, the Wayne family seemed to change their tune.

They placed a beautiful plaque over the location of Wayne’s burial in 1998. 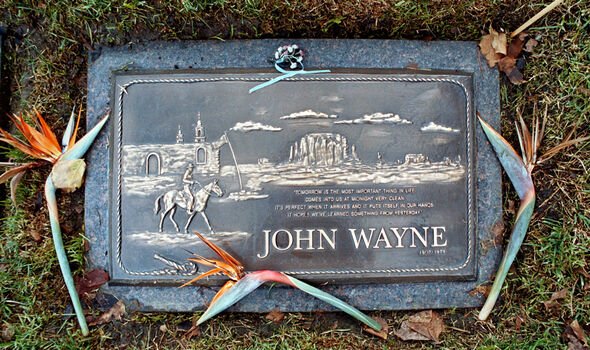 Wayne’s bronze plaque was then adorned with a cowboy on horseback riding through the Old West. This is, of course, a reference to the star’s movie career, as he frequently played cowboys in Westerns across America.

And the plaque was complemented with a wonderful quote etched directly into it.

Although Wayne requested “Feo, Fuerte y Formal” to be on his grave, his family went for something a little more uplifting.

His plaque reads: “Tomorrow is the most important thing in life. Comes into us at midnight very clean. It’s perfect when it arrives and it puts itself in our hands. It hopes we’ve learned something from yesterday.”

He then reminisced about the touching habit his father kept up to honour his fans.

Ethan continued: “[John Wayne] spent probably three to four hours a day just answering fan mail. Every letter got answered. They like him. If they want to go see him, I think it’s wonderful. He had a tremendous impact on people.”

Wayne had a profound effect on many people in his life. But perhaps no more than his own daughter, Aissa.

While on his deathbed, Wayne’s hand was held by his daughter, who asked him if he knew who she was. With his final breath and final words, he replied: “Of course, I know who you are. You’re my girl. I love you.”