As the only player in ‘Club 90,’ Rafael Nadal makes history.

With 92 ATP titles by his name, Rafael Nadal is among the most successful players in the Open era. Ninety of those titles have come on an outdoor court, and his only trophies under a roof arrived in Madrid 2005 and Sao Paulo 2013.

Thus, Rafa is the most prominent outdoor player in the Open era, standing 13 titles ahead of his closest rival, Roger Federer, who has won 77. Nadal’s first ATP crown came in Sopot 2004, and he added 11 more in the following season, ten of those on an outdoor court.

With his brutal dominance on clay, a couple of favorite hard-court events and four ATP titles on grass, Rafa has achieved the milestone and became the first player with 90 ATP outdoor crowns. The Spaniard skipped the second part of the previous year due to a foot injury, and he made a marvelous comeback in 2022.

Rafa is 30-3 so far this season, stopping the clock and claiming four titles from five finals. The Australian Open and Roland Garros are on the list of conquered events, and Nadal has done that for the first time in his career.

Rafa made a comeback at the beginning of the season in Melbourne, not playing at his best but claiming the title to gain confidence. The Spaniard used it nicely at the Australian Open, keeping his foot under control and performing an incredible comeback in the title clash against Daniil Medvedev.

Struggling with a fractured rib, Rafa lost to Taylor Fritz in straight sets and took a break until Madrid. The king of clay did not play at his best in the Spanish capital, and he struggled even more in Rome versus Denis Shapovalov.

The Spaniard almost retired in that one, and no one could tell would he be able to endure the efforts in Paris. Rafa took his doctor with him to Paris and annulled the foot pain with injections. That allowed him to perform on a high level and secure the 14th Roland Garros crown from 18 trips to Paris.

Roland Garros was Nadal’s 90th ATP outdoor title, and it will take some beating if someone wants to beat that 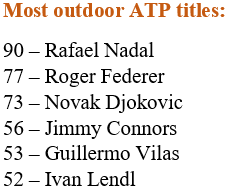