CONOR McGREGOR and Floyd Mayweather are reportedly in talks for a sensational boxing rematch which would be worth $1BILLION.

In June 2017 Mayweather did what most people expected and beat the UFC legend in the boxing ring. 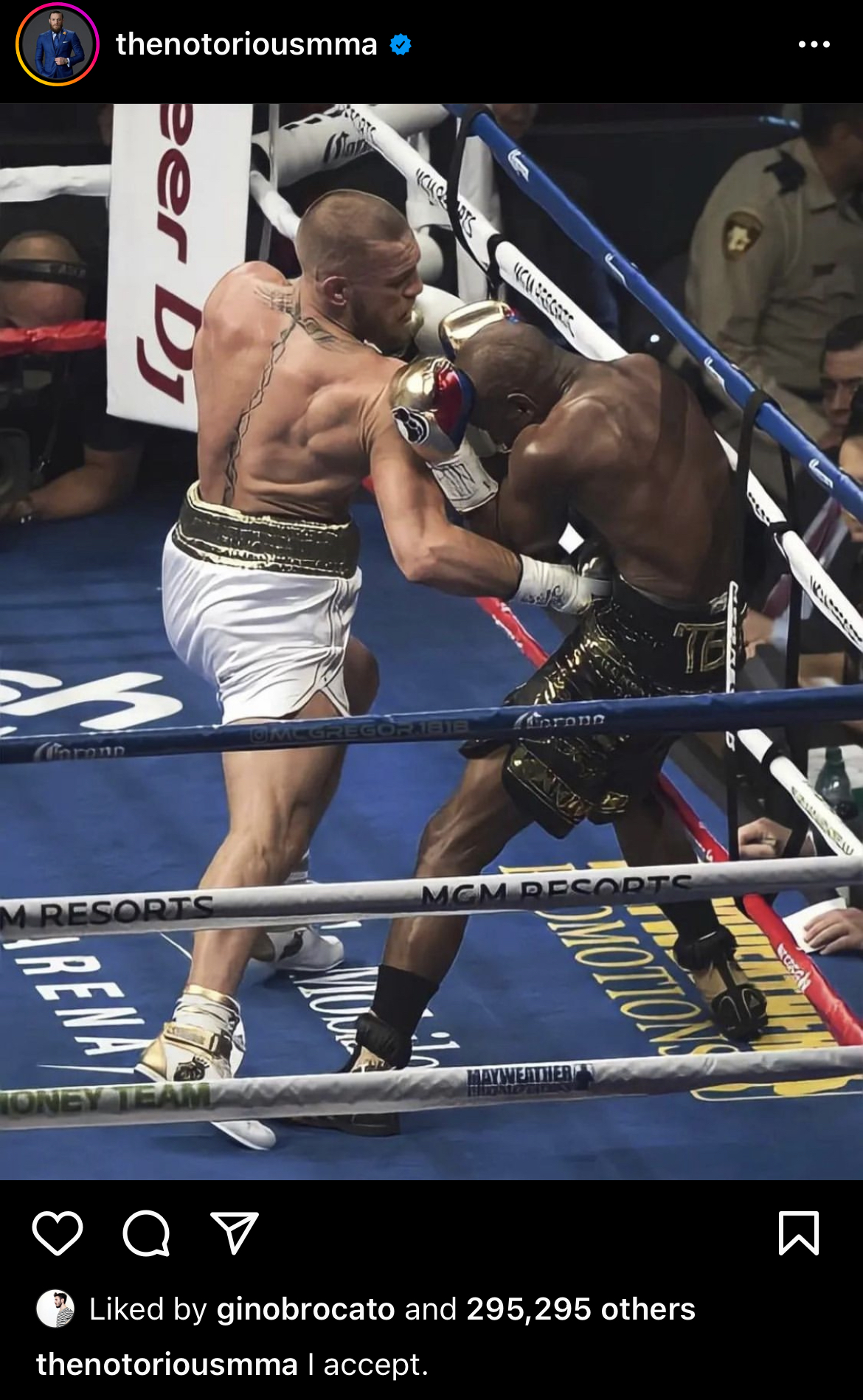 But McGregor drew plenty of plaudits just for reaching the 10th round against a man some believe is the greatest boxer ever.

Now, according to Fight Hype, the two sporting legends “are currently in talks for a potential rematch”.

The boxing website adds that Mayweather will secure another “nine-figure payday” if the bout gets finalised.

UFC legend McGregor then went on Instagram to claim that the deal could already be done.

He shared a photo from their first fight – conveniently where he was landing body shots on Mayweather on the ropes – with the caption “I accept”.

SunSport revealed earlier this year that the pair were in talks over a rematch.

Mayweather went 50-0 with the tenth-round Las Vegas stoppage of the Dubliner, making around £250million once all the pay-per-view sales were totted up.

And Money, 43, boosted that windfall at the bookies by carrying the novice in the early rounds and backing himself to get the win late.

McGregor, the former apprentice plumber who went from claiming £170 dole cheques to making the UFC a $4bn empire, cleared around £100m from the clash.

The rerun could eclipse even those silly sums, if the fight-loving Middle East enters the bidding to host and fans convince themselves McGregor has a better chance now Mayweather is even further past his impeccable prime.

Mayweather’s victory against The Notorious proved to be his last ever pro fight, taking his record to 50 wins and zero losses or draws.

He has since dallied around with exhibition bouts – all but one of which have proven horrifically one-sided.

The Money reduced Tenshin Nasukawa to tears in a 136-second beatdown in 2018.

YouTuber Logan Paul went the distance with Mayweather over eight rounds, but many fans speculated that it was the way it was meant to go.

And last month Mayweather ‘fought’ his old sparring partner Don Moore in an exhibition on a helipad in Dubai.

The 45-year-old floored Moore twice during the eight rounds as he put on a boxing exhibition in the exhibition.

Meanwhile, it was McGregor’s first ever professional boxing fight against Mayweather after taking time out of UFC.

But since their scrap, both men have hinted that a rematch could well be an option in the future.

McGregor has not fought in UFC for almost a year since he suffered a horrific broken leg in defeat to Dustin Poirier in their trilogy fight.

At present, Mayweather’s 2015 showdown with Manny Pacquiao is the biggest-money fight in history at £678m – but this could blow that out of the water.